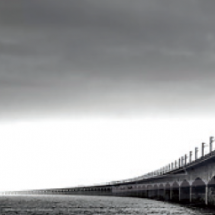 This edition of framework:afield, entitled ‘train’, has been produced in germany by regular contributor d. l. lutz. notes from the producer:
This earscape mainly features field recordings from a long-distance train in Germany going from Hamburg Main Station to Berlin Main Station, passing small towns, forests and river Elbe, meeting and overtaking other trains, allowing to hear horses and birds in the meadows, moving very slow and very fast… This ride is compiled for everyone who suffers from wanderlust and likes wind and track noises and bad conductor’s announcements because it reminds him / her of the pleasant, unburdened state of travelling. But without the visual information that the carriage window provides, the typical train sounds of metal, speed and echoes of the surroundings develop an unfamiliar, and often mysterious, life of its own.

By superimposing fragments of the fascinating two-hour post-modern composition “Music For Checking Emails” by Wolfgang Mitterer from Austria, the atmospheric, suspended, reminiscential aspect is increased. Mitterers topic is a different one, but his work is also dealing with the fragmented surface of this modern world – which happens to be an acoustical fit that works surprisingly well. Listen loud and have a good journey!

This edition of framework:afield, entitled ‘train’, has been produced in germany by regular contributor d. l. lutz. notes from the producer: